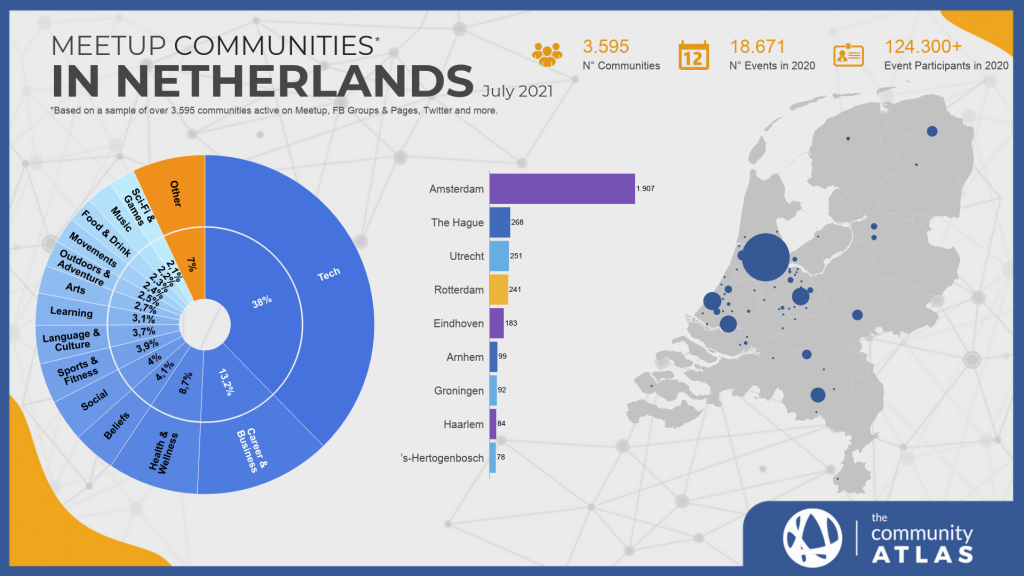 “The most” of everything: the Dutch are the happiest, the healthiest, the most physically active, the tallest and the biggest flower and vegetables exporter. They also have the highest population density and the biggest pub in EU, and their anthem is the oldest in the world. But let’s see in details what communities in Netherlands are about!

The Netherlands is the fifth country in Europe with the most Meetup communities and has one of the highest population density in Europe. Hollands (North and South) has the highest density of all provinces: in fact, almost 53% of communities are in Amsterdam. Around 92,5% of people lives in urban areas, and that’s why we see less communities on the east side of the Country.

Dutch rank in the top 10 of happiest people in the world, based on healthy life expectancy, freedom, trust, corruption and social support. When we take a look at the pie chart of categories, there’s no need to say that Tech is still the main one with an outstanding 38%, slightly more than communities in Germany.

But at third place we find Health & Wellness, because the healthier you live, the happier you are. They have the most nutritious, affordable and healthy food because they are the second larger exporter of vegetables in the world.

They’re also one of the most physically active population in Europe: they play sport on weekly basis but what they really love is cycling. Indeed they have 20.000 km of bike paths and cycle an average distance of almost 3 km per day.

But so many vegetables and activity makes you thirsty. So what do people in Netherlands do about that? They of course go to the largest pub in Europe, the Drie Gezusters in Groningen!

In The Netherlands there are more bicycles than people. With over 22 million bicycles and 17 million residents, it’s almost a bike and a half per person.

Where does this data comes from?

Those results are the synthesis of tracing more than 3.595 communities in Netherlands, active on Meetup as well as Facebook groups & pages, Twitter and other platforms.
The data is gathered through The Community Atlas, the worlds largest database of communities.

We considered a total of 24 topic categories.  All the topics that occurred on less than 2.1% of the total were collected under the heading “Other”.

DISCOVER YOURSELF
Explore more than 300.000 communities wordwide on TheCommunityAtlas.com