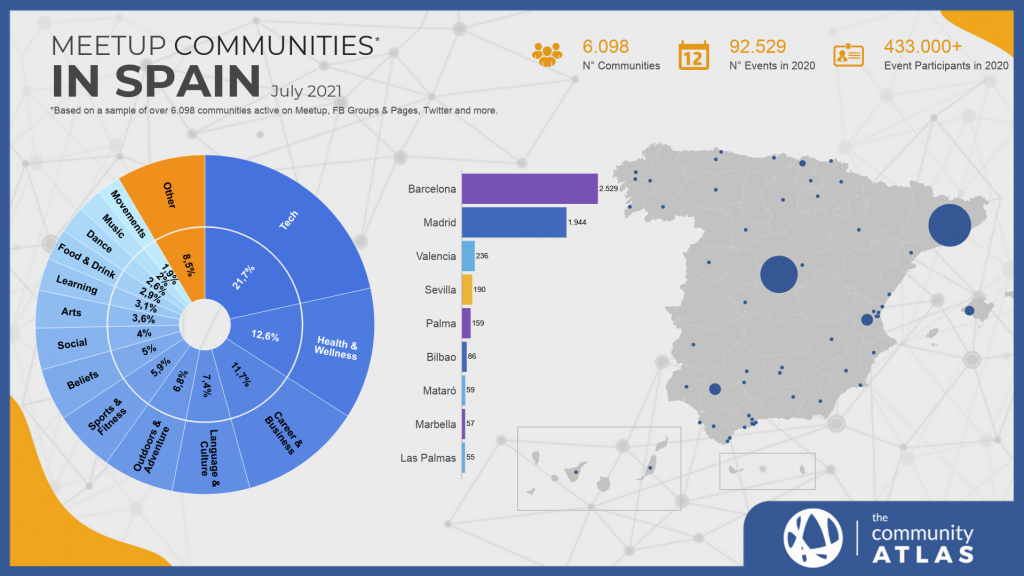 Spanish culture use a lot “Mañana Mañana”, an expression that means “no stress”; there’s no need to worry, things will work out just fine. This really help us to understand communities in Spain, but let’s watch it closer!

Spain is the second largest country and has the fifth largest population in Europe. Almost 12 million people live between Madrid and Barcelona: here is where we find the majority of the Meetup communities, almost a third of all. Compared to France, communities in Spain are just a few thousand less, but in 2020 they held almost 20.000 events more than French!

Spanish love a lot of stuff, other than paella, and that’s why we can see an even distribution of category, except for Tech which is always the biggest one.

But one thing they really seem to love more than anyone else is living. Indeed, Spain has one of the highest life expectancy of OECD country, preceded by Japan and followed by Switzerland and Italy. With all that “Mañana Mañana”, good food and wine and all those beaches, it’s no surprise that Health & Wellness is the second main category here. When we take a look at topic distribution we can clearly see what communities in Spain talk about most: Wellness, Meditation, Fun Times, Consciousness and a lot more!

But there’s another important topic that Spanish care about: female entrepreneurship.

In fact, after the Global Financial Crisis in 2008, female entrepreneurs set up 40% of all new businesses in Spain. Of these women, mums decided to stand out and create their own business shifting traditional work and homelife boundaries.

One example of this great women empowerment is Chicas Poderosas. This community aim to promote female leadership and gender equality in media. The goal is to create opportunities for all voices to be heard. Founded in 2013 by Mariana Santos, they offer professional training to provide women with concrete skills they need for their career. Chicas Poderosas connects more that 6.000 women across 16 countries, Spain included.

Spain has more tourist than people living there. In 2018 more than 82 million tourist arrived in the Country, while the residents were just 46,7 million; this made Spain the second most visited nation of the world!

Where does this data comes from?

Those results are the synthesis of tracing more than 6.098 communities in Spain, active on Meetup as well as Facebook groups & pages, Twitter and other platforms.
The data is gathered through The Community Atlas, the worlds largest database of communities.

We considered a total of 24 topic categories.  All the topics that occurred on less than 1.6% of the total were collected under the heading “Other”.

DISCOVER YOURSELF
Explore more than 300.000 communities wordwide on TheCommunityAtlas.com